seemingly I opened the letter and felt a giddiness and excitement that I knew she would not understand. I shared the news with her, and she was happy with her accomplishment and feeding off of my energy. Suddenly something that was too impossible to even dream of years before was about to be reality. I discovered that this part of my identity was still alive.  But it felt lighter. The anger had gone but the passion had remained.

Chloe had participated in Read for the House which is a fundraiser for the Ronald McDonald House. She was one of the top fundraisers in her school, which meant she got to go to the …. Eagles Locker Room!!! And she got to bring one adult with her. There was no question who that was going to be!

If you have been following me for a few years and haven’t known me for a long time, you might not understand why I would be so excited about this. Let’s take a trip back fourteen years to a previous iteration.

I was at the inaugural Eagles game at Lincoln Financial Field with my dad and some of his friends. I grew up with football in the house but no interest at all. But I guess my dad had an extra ticket and I tagged along. It was fun. They lost (something I got used to experiencing). And somehow I was hooked.

This was a period of time in my life where I didn’t work on Sundays so I could watch the games. I screamed at the tv (or at the field on the many occasions that I went to a game) when things did not go well. I carried the frustration and anger of a loss with me for days. I was there when they beat the Cowboys 44-6. I was there when they beat the Falcons to go to the Super Bowl (let’s not talk about what happened next though, okay?). The Eagles pep band was at our wedding. Serious fan. 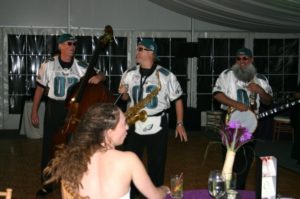 When Michael Vick became the quarterback, I stopped watching. I began to lose interest in football in general. I soon had my Sundays back. And I no longer had this source of intense and angry energy. Pretty quickly, I could feel the space this created in my life. I have not been to a game since Chloe was born seven years ago and I don’t think I’ve watched a full game in at least a couple of years. It feels like a lifetime ago.

And yet, when I opened that letter and saw that we were going to the Eagles locker room, the excitement was still there.

The locker room of the team that had been such a big part of my life. I could not find a single name on a locker that I knew and I realized that I did not even know who the quarterback was. This would have been unimaginable just a few years ago. Despite this, it felt like an honor to be there.

When we took our seats and looked at the program, I got an even bigger surprise – we were going to get to go onto the field. My excitement rose all over again. A short while later I was standing on the very field where some of my favorites had played – McNabb, Westbrook, Akers, and of course, Dawkins. This was a powerful moment for me.

In all of the years that I was an avid fan, the possibility of going to the locker room or onto the field never even crossed my mind. It would have felt like an impossible dream.

In all of the passion (and anger) that I had in those years, there was still some distance from it. There was the collective energy of being in the stadium (and looking back, a lot of the draw was probably about being part of a larger community).  Even being there, there was some sense of detachment. The stands were as close as I ever thought I would get.

And then, I walked away from the anger. I let it go. I gave myself space from what had been a deep part of my identity. And years later, completely detached from the anger, I found my way back to the passion and onto the field.

Chloe wants to go to a game now, to see the field in action, and to create the context for this incredible experience. We’ll go, and I’m curious to know how it will feel for me then.

What I do know though is that even without the anger, I still bleed green.

This, my friends, is how you can hold onto the passion, let go of the anger, and manifest even the most seemingly impossible dreams.